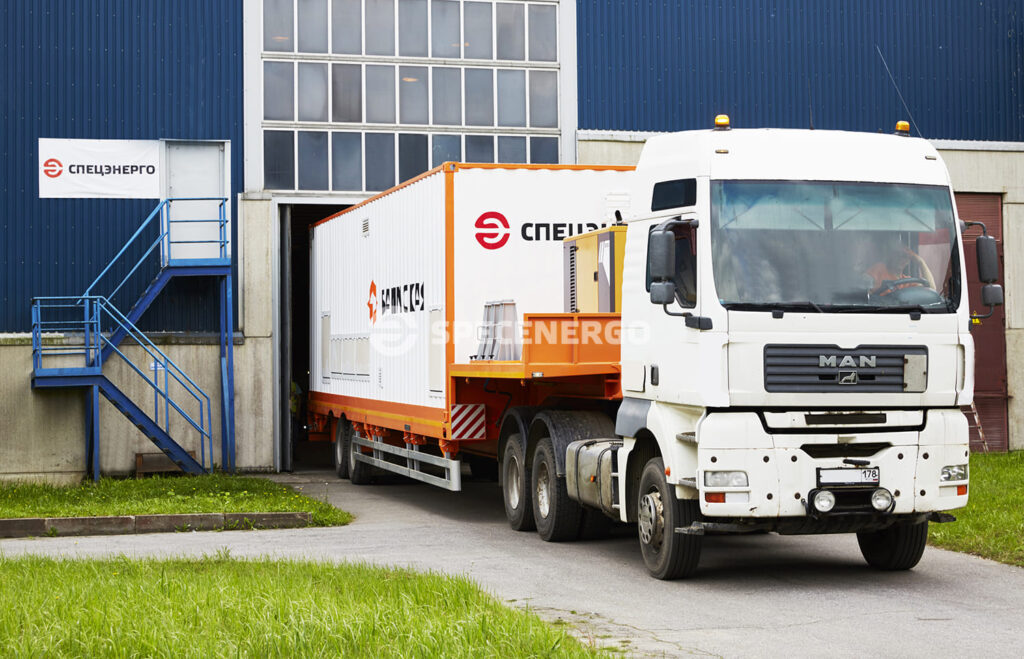 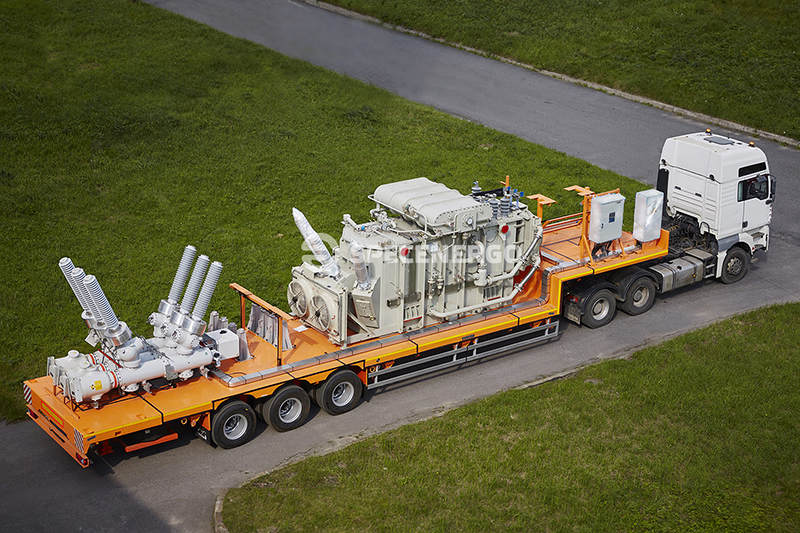 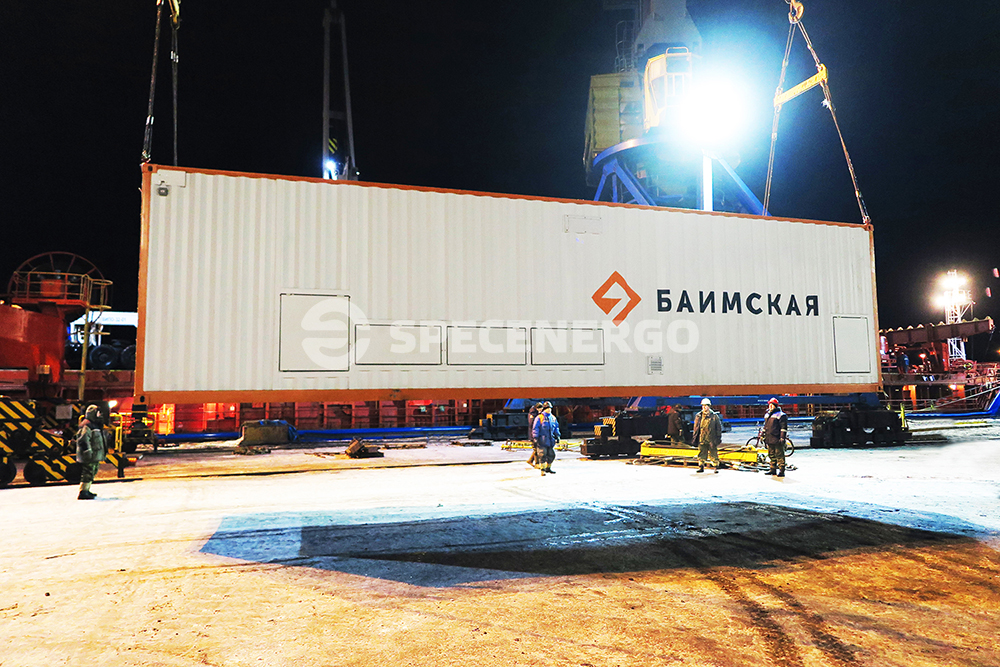 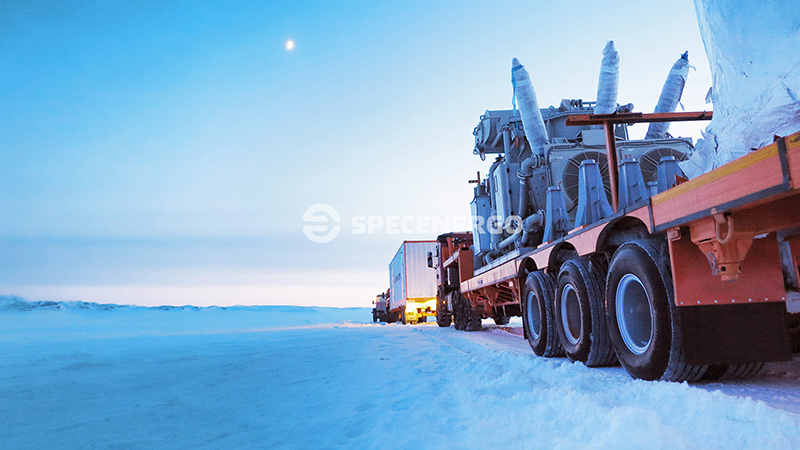 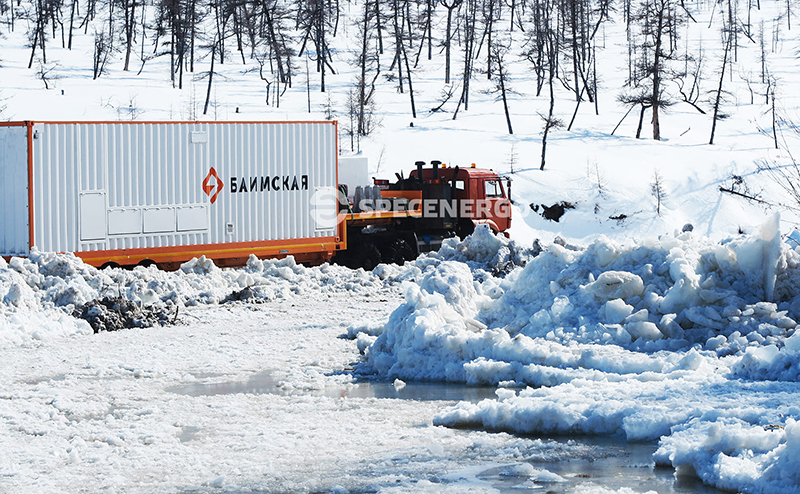 MMS for the Far North

SPECENERGO manufactured, delivered and installed its 110/10 kV (25 MVA) mobile modular transformer substation (MMS) for electric power supply of the mining and processing integrated plant at Peschanka Field in Bilibino District of Chukotka Autonomous Territory. That order was critical for LLC “SPECENERGO” from both production and goodwill standpoints as no mobile substation for the Arctic climate had been manufactured in Russia before.
The Customer chose the mobile modular substation as it had all the specifications the project required. In particular, they included full operational readiness and motorcar transportation, small dimensions, small deployment area as well as the absence of service employees (the MMS is a substation that requires no servicing). According to SPECENERGO’s Chief Commercial Officer Mr. Alexander NEMYKIN, the project differed from the numerous previous ones with its criticality for achieving the final goal being the construction of the mining and processing integrated plant since the mobile substation is expected to supply the entire construction site with electric power.
“The Customer included delivery of the MMS to its operation location into the work scope,” says Mr. NEMYKIN. “Given that the final unloading destination is hard-to-access and remote, we had to plan the equipment manufacture and shipment process as precisely as possible. Even the smallest delay could result into failure to comply with the MMS delivery deadline by more than half a year as the Northern Sea Route was used for shipping from Arkhangelsk to Pevek with over 600 kilometers more by winter roads thereafter. In the course of implementing the project, we monitored the manufacture and supply processes of all components from metal to the power class cutout and 110 kV transformer jointly with the customer’s representatives. After the factory acceptance testing, the customer rated the qualifications of our professionals highly.”

“Any manufacturer is always committed to reliable and failsafe operation of its products throughout their declared operating lives,” says Chief Technical Officer at LLC “SPECENERGO” Mr. Sergei ARTEMOV. “The mobile substation for Chukotka is a know-how to a certain extent as its components must be selected subject to the extreme conditions of transportation (marine voyage and winter roads) and continuous operation in the permafrost zone with constant winds and heavy frosts.” SPECENERGO’s engineers designed and developed all the elements for their own first Arctic MMS. For example, the articulated trailer structure was modified subject to the adverse transportation conditions. The 110 kV high voltage module retained three axes instead of five used in the standard version of the MMS. “For the substation, we had chosen the off-road trailer with leaf suspension, and later we got evidence that the decision was correct,” continues Mr. ARTEMOV. “We created the lightweight mobile 110/10 kV (25 MVA) transformer designed for operation in the Arctic at low temperatures. It was also reinforced structurally for off-road transportation. Additional thermal insulation of the 10 kV module allows normal operation of the electrical equipment installed inside it at outside temperatures of minus 50 to 60 degrees Centigrade. Additionally, all elements of the MMS are made of grade 09G2S steel known for its high impact hardness and increased frost resistance.”
The engineering solutions for the MMS are unparalleled anywhere in the world. This substation is one-of-a-kind. After completing the manufacture, acceptance testing and providing spare parts and accessories (SPTAs), our professionals prepared the MMS for its long trip to the site. That was how the first implementation stage of the innovation project for Chukotka ended. In September 2017, the MMS departed from our Saint Petersburg plant to Arkhangelsk. After making 1,400 kilometers in 5 days, the mobile station reached the loading port successfully. It was loaded onboard the vessel after dividing it into the following components: power transformer, 110 kV module articulated trailer and power class cutout, 10 kV module, 10 kV module articulated trailer and SPTAs.

Thermal film was used for packaging the primary parts of the substation to minimize adverse impact of sea salt on the equipment. That is how the MMS delivery marine stage via the Northern Sea Route over 4,600 kilometers long started. 22 days after departure of the vessel with the MMS from Arkhangelsk, SPECENERGO’s representatives met it in Pevek. Although it was still late autumn in Saint Petersburg, winter had begun in Chukotka already. The logistics provided for storage of the MMS in the port of Pevek for several months until opening of winter roads supplying the peninsular settlements with fuel and other cargos. To do it, the MMS was duly prepared and packaged. The reliable winter road from Pevek to Bilibino appeared in April 2018 only due to the abnormally warm winter. It was dangerous to drive along that road with the heavy load (the weight of the MMS with the platform is 67 tons). When the much needed winter road opened, the convoy was formed and departed from Pevek on 19 April. During the first day, it made over 150 kilometers. The final and the hardest MMS transportation stage began. The Far North is not only beautiful but also unpredictable and dangerous. “That winter in Chukotka was very snowy, which compromised the road quality materially, and the convoy speed had to be reduced to 5 kilometers per hour sometimes,” says SPECENERGO’s Chief Commercial Officer Mr. Alexander NEMYKIN. “Moreover, when the sun melted the snow, the road was slippery and the convoy could move only at night primarily. Mountain crosses, rivers, pits and hillsides threatened to cut short our transportation efforts but the highest professionalism of the carrier overcame all the challenges.” On 26 April, the vehicles entered the city of Bilibino, with slightly more than 200 kilometers remaining to the final destination. After replenishing its food and water supplies, the convoy accompanied by two truck bulldozers departed to Peschanka. The final section of the way was ahead. Bulldozers operating on a round-the-clock basis allowed to pass hard sections of the way easily. Having passed the hard mountain crossing 105 and the Anyuy River, the convoy approached the last ascent to Peschanka. According to the persons involved in the trip, the heavy weight of the MMS and uphill gradient prevented using the primary road to the field. The detour was also unfit for such cargos and had to be improved urgently using bulldozers. Finally, on 2 May 2018, after making 6,650 kilometers from SPECENERGO’s production site, the MMS arrived at its operating location.
Currently, installation operations are underway at the substation and after they are completed it will start solving its primary problem being ensuring reliable power supply of the mining and refining integrated plant under construction. 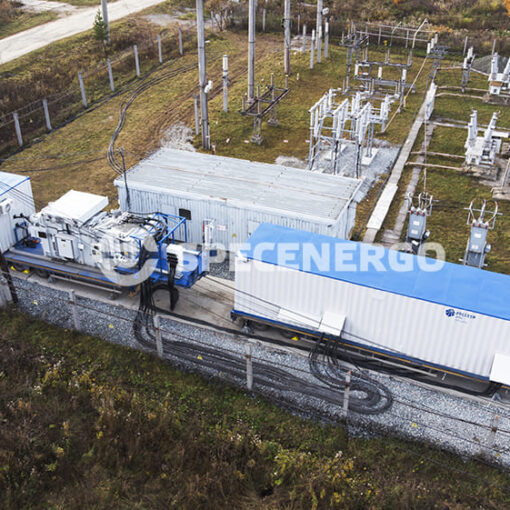 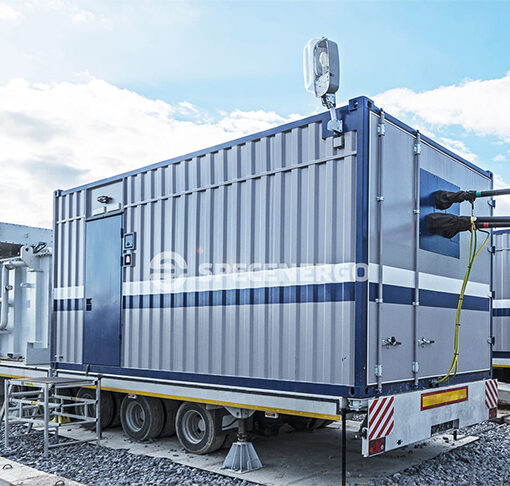 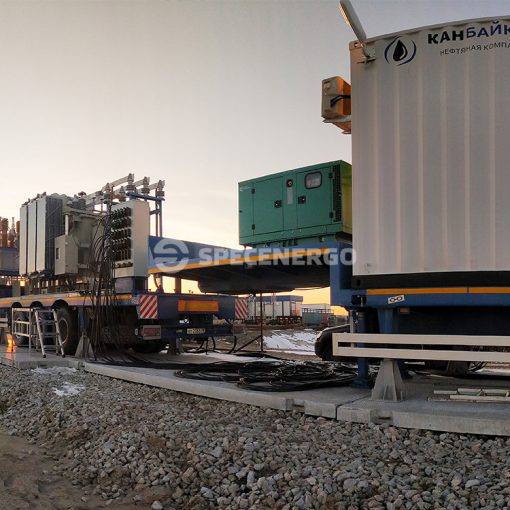 Two mobile modular substations (MMS), manufactured by the LLC “SPECENERGO”, were put into operation at the Untygeyskoe oil field in the Khanty […] 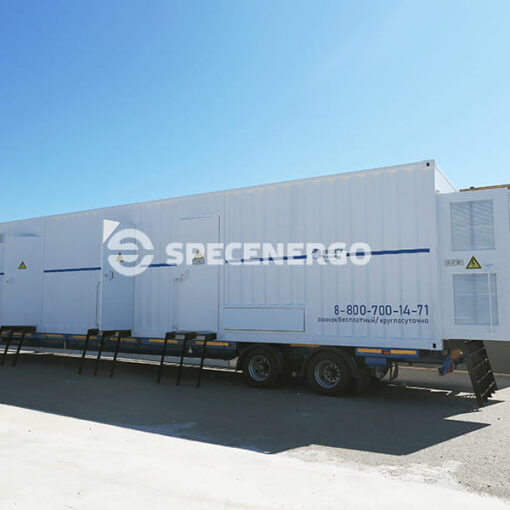